Well, I think we tried very hard not to be overconfident, because when you get overconfident, that’s when something snaps up and bites you.
– Neil Armstrong, Moonwalker and Wannabe Boston Marathoner

A cold, rain-infused, stiff 20 mph headwind to be more precise.

It should have been a complete sufferfest but it turned out to be a life-affirming, glorious gutcheck victory.  Certainly the most satisfying (and only BQ at Boston) in my eight Hopkinton-to-Boylston forays.

All the stars were aligned.  I had finally perfected the secret sauce.  I got this.

A few days before the race, John Hancock tweeted they had selected my 2015 cresting of Heartbreak Hill photo to be one of 26 adorning the street banners along the Boston Marathon race route.

Just another sign that 2016 was going to be something special.

I would patiently work my way through the Wave 2 crowd, catch up to the Ethiopians at Newton Falls, pull them up Heartbreak Hill and taunt them unmercifully while running backwards through Kenmore Square.  Left on Hereford, right on Boylston (I’m still running backwards) with a triple Salchow at the finish for next year’s #RunBold banner.

I was done by Mile Three. 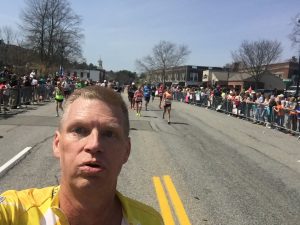 Not DONE, done.  But after 50+ marathons, a few simple truths become evident.  You never really know if you have a shot at a solid race until Mile 13 or 14 or 15 or 16.  But you do know by Mile 3 if you are going to have a bad race.  I knew very early on there was little doubt this inglorious effort would provide a nice counterbalancing bookend to last year’s glorious journey.

By the time I was trying to muster a decrepit jog up the Newton hills, the Ethiopians were showered, dressed and on the plane to their next paycheck.  My finish time of 4:16 was almost 50 minutes slower than my qualifying time.

I can point to a few potential culprits:

So what really went wrong?

It happens.  About 2 in every 10 marathons is one where almost everything clicks.  This Boston was just one of the 8 in 10.  The Marathon Gods will have their way.

There was a wisp of cramping in the air at Mile 10.

By Mile 26 on Boylston Street, despite miles of intense negotiation, all of the collective muscle unions were on the verge of strike.  One wrong thought and that first domino would trigger a general cramp, completely shutting down run production.

Despite the incredible discomfort, this was Boston.  This was Boylston Street.  This was what you worked weeks, months, years and maybe decades for.  So I smiled.  I grinned.  I laughed at the absurdity of feeling so good about feeling so bad.

That’s when I met Anke.

She was lying on her back in the middle of Boylston with her feet pointing toward the finish line 500 feet away.  Anke was the first runner I had seen in 26.1 miles who was having a tougher run than me.

Helping her get to her feet, I asked if she was OK to finish.  Her eyes rolled back into her head and I assumed she meant “yes”, so I helped Anke up and pointed her toward the finish line.

Now under her own power, Anke headed generally east-northeast and then started weaving in all four cardinal directions at the same time. Circling back and grabbing her arm, I told Anke my legs were about to cramp up and asked if she would mind helping me to the finish?  Her eyes rolled back into her head and I assumed that meant “yes”. 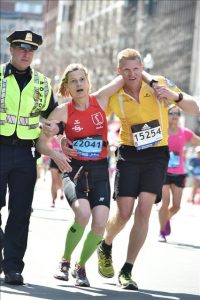 20 feet from the Boston Marathon finish line, one of Boston’s finest and several volunteers grabbed Anke as she went completely limp.

I watched her cross the finish line and collapse into a wheelchair as both of my calf muscles made their way up the back of my legs to somewhere near my armpits.

With a decent effort I could spit far enough to hit the finish line, but at this moment I could not even crawl there.

The crowd implored, “YOU CAN DO IT!”

My attitude was incredibly positive at that moment, but a positive attitude will not correct for poor hydration and a sodium/potassium deficiency.  Just when I was certain my fibula would snap in two, the cramps released.

The Marathon Gods taketh and they giveth.

And they gave me the chance to help a fellow runner finish the greatest race on the face of the earth.

I think we are more than even.

It was another great Boston weekend with friends and family.  I had certainly hoped to run better, but that’s the way it goes.  Recovery was tougher than expected, but we’re getting back on track with YTD mileage approaching 1200.  With a BQ at Chicago already in the bank, I should be back in 2017 for a 10th Boston Marathon in a row.  Next time I’ll try to be a little smarter about my hydration and pace . . . but I’ve made that promise before.

At 4:45 AM on Saturday, June 4, I’ll be lining up at the start of the KT82 relay as the first runner in the history of the race to run in the solo division.  The KT82 runs along the Katy Trail from St. Louis to Hermann, MO.  They cut out a couple singletrack loops for the solo runners, so the total distance is closer to 67 miles.  If I can finish, chances look very good for a podium bow . . . as of last Thursday I was the only solo runner signed up.

The 5th Annual Grandma’s Marathon DOUBLE will start at 2:45 AM at the finish line in Duluth on June 18.  We’ll make our way up to Two Harbors and the start of the actual marathon at 7:45 AM.  Last year, Ben McCaux became only the second person to run the double and he has threatened to return again this year.  My son, Zach, will be there for the 26.2 start . . . his 4th Grandma’s Marathon.

Alright, my friends, take care and I hope to see you out there.